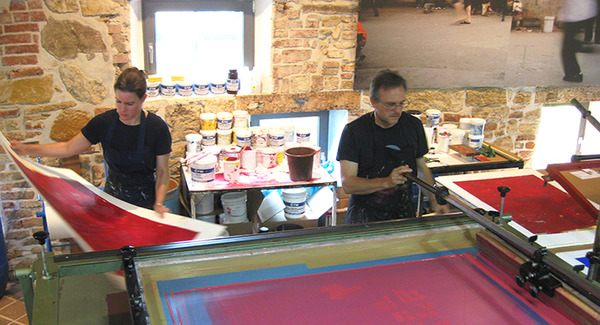 Aspinwall Editions is a printer, publisher, and distributor of fine-art prints with facilities in New York City and Rheine, Germany. Founded in 2012 by Ann Aspinwall and Knut Willich, Aspinwall Editions specializes in screenprint, intaglio, and relief techniques, and focuses on creating and promoting works characterized by remarkable richness of color, line, texture, depth, and luminosity that can only be achieved through printmaking. Aspinwall Editions offers contract printing services in addition to collaborations with artists.

Knut and Ann have extensive experience in the field of printmaking. Knut was formerly the proprietor of Atelier Limited in Münster, Germany, and taught printmaking at the University of Applied Sciences in Münster. He is a founder and the chairman of the Print Association Bentlage in Rheine, where he has organized three international printmaking symposia. Ann previously worked as a printer at Pace Editions in New York and as a Print Specialist in the Print Collection of the New York Public Library.