Artists > Susan Goethel Campbell
Susan Goethel Campbell creates multi-disciplinary work that considers the contemporary landscape to be an emergent system where nature, culture, and the engineered environment are indistinguishable from one another. Central to her practice is the collection, documentation, and observation of seasonal change and ephemera in both natural and artificial environments. Her work is realized in several formats, including installation, video, prints, and drawings, as well as projects that engage communities to look at local and global environments.

"My recent series of prints," writes Campbell, "draws from the phenomenon of galaxy clusters and visually interlaces the concept of deep space with satellite views of cities on Earth. Pandora’s Cluster is the nickname of a giant galaxy known as Abell 2744 that formed over the course of 350 million years from a mash-up of several smaller galaxies. Images from the Hubble Space Telescope show how the immense gravity of Abell 2744 functions as a lens, brightening distant galaxies and warping space. This effect, known as gravitational lensing, has inspired new ways for me to work with light in my prints."

The Aerial prints are part of an ongoing series that focuses on nocturnal bird's-eye views of cities and atmospheric phenomena. The black and gray tones are printed from a birch matrix, while the linear elements are comprised of tiny hand-punched holes that allow light to pass through the paper. 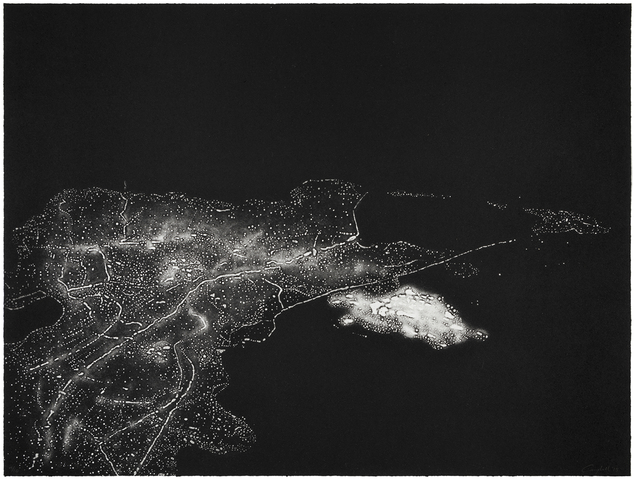